Way, way back in February, I ran a trail half marathon, in the mountains of NW Beijing. It was called Aijiang Mountain cross country race. Here is the race report.

Previously, I’ve only run one “trail” race, a full marathon in the Methow valley of WA state. It was the Sunflower trail marathon, back in May 2015, i think…. LOVED it, the bright sunshine, warm air, killer views as we climbed and descended the single tracks of the North Cascades. But all that decline, humbled me. my knees and thighs hurt for days. Regardless, I knew I’d be running more trail races. Didn’t know at the time, the next one would be in China.

Few months ago, I fell in with a local running group, here in Beijing. They are a nice mix of recreational runners, mostly middle of the pack speed but a handful of hard core, seriously fast athletes. And the medium age is probably early 30s. So, if I want it, they will push my limits.

When I first heard about this trail race in January 2017, via the running groups WeChat page, I thought it a good idea since I wanted to race something during my training for the Seoul marathon in mid march. (that race report is next) The trail race would be end of February, starts at about 3000 feet so it would be COLD! But, I’ve run all winter in Beijing, figured I could deal with cold. Six of us from the running group signed up for the half marathon (there was also a full marathon) and someone booked a driver/van. That was fantastic. Just had to meet the van at 6am, at local hotel and no transportation issues. Unfortunately, there would be three other factors that required my full attention.

First, the white stuff. Beijing is in a dessert and we received ZERO precipitation in January into mid February. Then one week before the race, the city gets about 3 inches of snow and the surrounding mts get twice that. We hoped the sun would have a few days to melt all the snow. Sadly, that didn’t happen. In the shadows, the trail held a powdering of the white stuff and yes, covered rocks very slicker-ry. 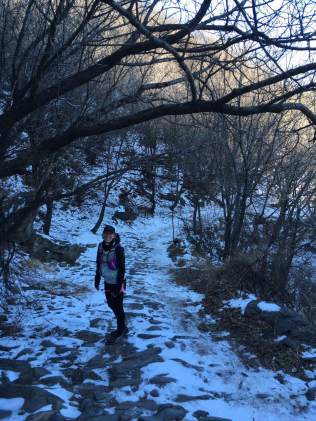 About a quarter of the course looked like this. 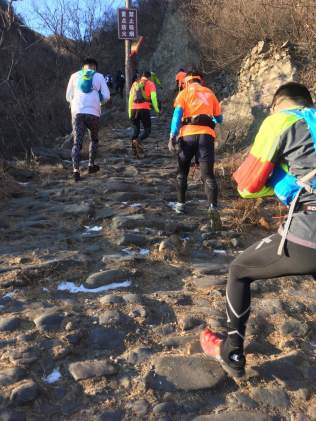 At the start, straight up.

The second unexpected challenge to the trail were the stones. (see ‘broken/twisted ankle waiting to happen’ pic above). Most people, like me, just gingerly maneuvered over the snow and slick, large stones. Thankfully, most of the trail wasn’t like this. It was more like single track or Forest service roads- smooth sand and snow free.

Our van driver experienced a few issues with the directions and so we arrived about 15minutes before the start gun. Due to my lack of experience running trails and the 1400 meters of climbing, I held no illusions of a fast finish time. Dropped off my drop bag, hit the head and arrived at the start line as the gun fired. With both distances starting together, maybe 100 people surged toward the first climb.

From the start, we climbed straight up. Few people “ran”, most were just walking, knowing to save that energy for later. Getting used to walking or jogging over the large stones was much harder than I expected. Since most people walked the steep parts, the crowd didn’t completing thin out for the first few miles.

Did I mention the weather was PERFECT? Bit cold, in the low 30s to start but bright, warm sun and temps climbed up into the 50s by the time I finished. As we climbed up to the first ridge line, the view was so clear could look east, all the way back to a few Beijing towers. 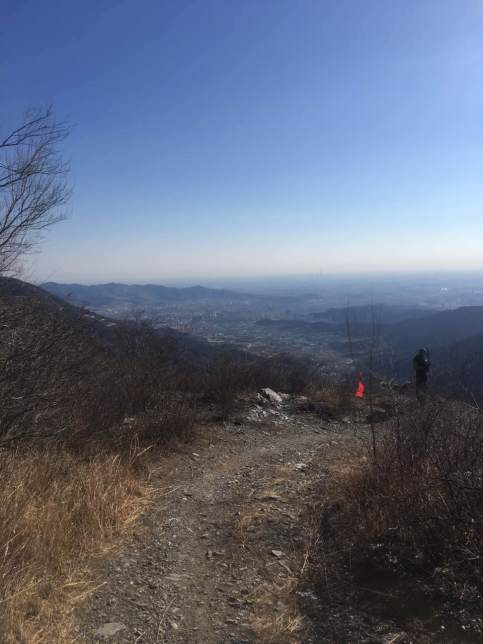 Stellar, clear blue sky and can just see Beijing in the distance.

The above picture shows what most of the trail looked like, much improved over all those stones. And the red marker. A million thanks to all those volunteers who spent the time to mark the course so well.

So, you might be asking, ‘how would you compare this race to a US trail race, what was different?’ Good question, how about: 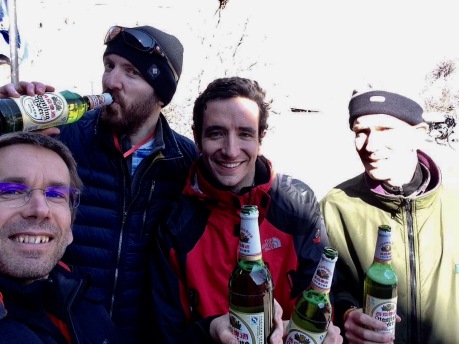 The end of the course, held significant, steep downhill. And up to that point, I felt great. But those steep declines, I had to walk and my thighs, hips and knees started to bark. Gotta figure out a better way to train for the declines, since what I did before this race clearly did not work. Since the guy on the left of the picture above and I likely were the only two runners pushing 50, I placed 15th overall, 2nd in my age group with a 3:25 finish time. Very pleased with that result. 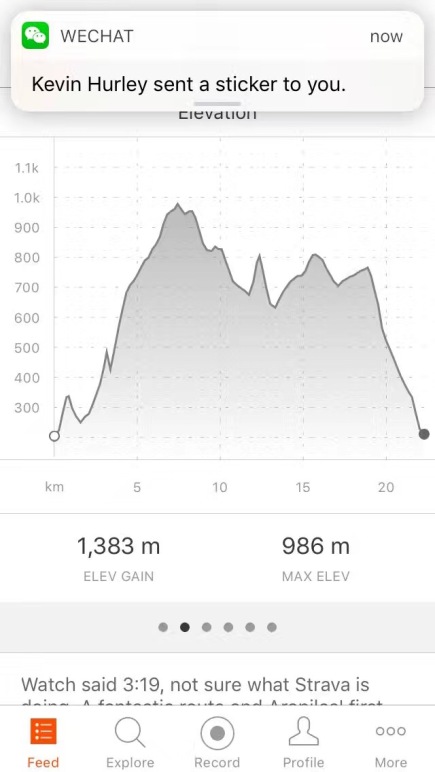 I would highly recommend this race. And I might even run it again next year. Well organized, minus the lack of potties, friendly hosts and amazing views. For a moment, forgot how nasty the air pollution was in Beijing, just a few days earlier.

Training to qualify for the Boston Marathon and simplify our life, as a stay at home dad.
View all posts by Scott →
This entry was posted in China, marathon training, Race, Travel and tagged Aijiang Mountain cross country race, Beijing, China, Half marathon, Marathon Training, trail race. Bookmark the permalink.