At the moment, the family is sitting on a Delta B767-300ER, on the tarmac at SeaTac airport waiting to fly, not visiting but to move, to Beijing. Yes, Beijing, China. How did this happen….? Good question.

Don’t think I have mentioned how this whole ‘move to China’ thang began.

We are moving for a new opportunity for my wife with a large NGO, based in Seattle. The assignment should last between 18-24 months. I believe she first mentioned this potential opportunity way back in early Spring 2015. Initially, we both took the attitude, “I’m not sure we really want to move to China but let’s learn more about this.” Within a few weeks a few informational interviews started.

I do clearly remember the night she stated, ‘if’ I’m going to continue to move forward with this, we need to make some level of commitment. This ‘idea’ of moving to China evolved into we need to think in terms of, will we accept moving to China.” The real interview process began and then, the after the job offer arrived, the company offered to fly the entire family for a week’s visit in August, to help us make a tough decision.

Our August visit to Beijing far surpassed expectations. To be perfectly honest, we had few or low expectations. We’d traveled once before, playing tourist for a few days before we adopted the boy, back in 2010. Back then, we were so fixated on the upcoming adoption that we didn’t really let life in Beijing soak in.

This time, the attitude and vibe was completely different. Could we live here, would we want to? Doesn’t Beijing have the worst air pollution in the world? The week of our visit, crystal clear, blue skies and temps in the 80s. Yes, humid but no trouble for just a week. Naturally, the government helped create those Carolina blue skies by removing half the cars off the streets due to their hosting the World Track and Field championships, the same week of our visit.

We spent the week touring three private international schools and LOTS of apartments. All the schools impressed but the apartments did not. Way overpriced, and the low quality was surprising. Making you pay London or NYC prices but what you get does not meet expectations.

What the apartments lacked, the food made up with it. WE LOVED EVERYTHING WE ATE. The breakfast brunch buffet at the Westin, never grew wearing of. The dumplings, noodles, yogurt, amazing fruit, did I mention the dumplings?

Perhaps the most surprising thing about this trip was the boy’s reaction. He seemed to have a connection or peace about being there. Me, the mass of humanity (22 million residents), could be overwhelming. Not for him. He is Chinese after all and being surrounded by people who looked like him must have been comforting, on some level. And of course, he too loved the food.

He wasn’t shy or freaked out when we toured schools and the first grade teachers invited him to sit with the class. (The school year began the week before.) The kid has been through a lot and can just roll with whatever life presents. Wish I was more like that.

On the flight home, we de-briefed the pluses and minus of this unique opportunity: 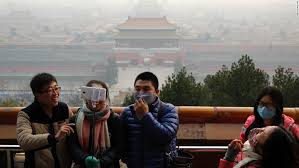 What would be your decision?

Training to qualify for the Boston Marathon and simplify our life, as a stay at home dad.
View all posts by Scott →
This entry was posted in China, Holidays, marathon training, Travel and tagged air pollution, Beijing, China, Chinese dumplings, Expat. Bookmark the permalink.

4 Responses to Move to Beijing