Haven’t talked about my running in way too long. Still running and training for Eugene and my second BQ.

February was a tough month and likely the reason I haven’t written much. As I often do, I did a silly thing and gave myself an ‘over use’ injury that lasted about a month. Basically, I pushed my body too hard when I was tired and my body pushed back. This time wasn’t calf muscles but left knee. Had to cut my February planned miles by about half but fortunately, able to run through it. Luckily, with LOTS of icing, stretching, some rest and a PT appt, bounced back in March.

Historically, every single marathon plan, I ‘plan’ to run a half marathon as a LR. Running a formal race during your marathon training can yield several benefits including practicing your race day routine (fueling, clothes, pacing, etc) and testing your endurance. For a variety of reasons, this ‘planned’ race hasn’t happened, not a single time. It finally happened this year. I signed up the Birch Bay 30k just a few days before race 3/28.

The few days before race day, I really didn’t know what to expect in terms of what I could do. Not only did I have the big drop in miles from February but the previous week I dealt with a fever and nasty stomach bug. Luckily, short lived bug. I decided to see if I could average between 8:15 and 8:30 per mile. That would be a decent LR pace, since 45 seconds slowly than marathon day pace (7:42).

Birch Bay is just north of Bellingham, WA and below Blaine. Super close to the Canadian border and I think more Canadians ran it. The course looked mostly flat, following the contour of the coast out and back twice. Scenic but very exposed if weather turned nasty. I ran the 30k because there was no half marathon, just 5, 15 and 30k.

Left the house by 5:30am and arrived with an hour before the 8:30 start. Light rain was falling and some cool wind. All runners start together but didn’t expect a crowd. Couple hundred folks total and just 100 for the 30k. After the gun, I fell into a small group running bit over 8 min pace. Seemed like a nice easy pace for stayed with them for the first three miles and clocked 8:10, 8:12, 8:22. Knew I could do better than that so picked the pace and held it under 8:00 until mile 9. Felt strong so decided to finish the last two miles of the first half just over 8:00 then go for a negative split. The rain had stopped and the sun actually came out and felt amazing!

Starting with mile 11, didn’t get above 8:00 again. This is the first race in years where I actually passed people. How great is it to slowly, very slowly catch up with runners ahead and pass them. Due to the small field, in those 7 miles I likely only passed about 10 people but each one felt empowering.

Last three miles, put the pedal down to see what was left in the tank and finished with 7:31, 7:21 and 7:26! Crossed the finish line at 2:25hr (7:50 average pace). A negative split. I was thrilled not only for this accomplishment but a 7:42 average pace appeared possible for Eugene next month and earning that BQ. 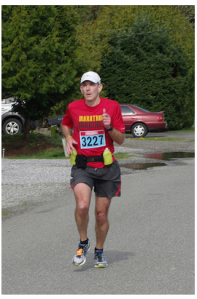 Yeah, I am hurting a bit here, as I approach the finish line.

Less than 5 weeks until Eugene….

Training to qualify for the Boston Marathon and simplify our life, as a stay at home dad.
View all posts by Scott →
This entry was posted in marathon training, Race, Travel and tagged Birch Bay 30k, long run, Marathon Maniacs, Marathon Pace, Race, race report. Bookmark the permalink.