Riding home from school on the InterUrban North trail.

For over a year I’ve been debating buying another bike. Not just any ‘bike’ but a bike that can carry lots of stuff, including the kid. I want a bike that can transport groceries, to help eliminate short distant driving, and a bike that I can commute with the boy on board.

I’ve been looking for a ‘cargo’ bike. They come in all shapes and sizes: 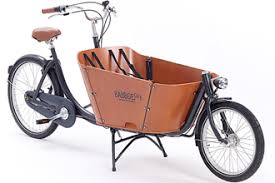 The cargo bike ‘mania’, as some call it, has been a grassroots effort for about a decade or so. And it is expanding leaps and bounds, especially here in the Pacific Northwest. Fortunately, we live near an amazing and new bike shop that focuses on cycling for the family–G&O Family Cycling. And they helped us narrow down the options.

These guys are super friendly and knowledgeable. Will and I visited the store several times, took a few test rides and asked more questions than I’d like to admit.

After talking about it, debating it and procrastinating (which I do over any major purchase), we decided to go big and bought an EdgeRunner 27dLux, by Xtracycle. 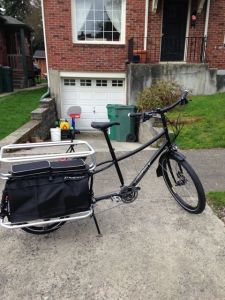 This things is a BEAST, an 18 wheeler for family cycling. And we stacked up on the accessories:

X2 bags (side saddle bags)
Hooptie (a handrail that goes all the way around the deck)
Mini Magic Carpet, 2 (seat cushions, on the deck)
Rolling Jackass Centerstand (insanely powerful and stable kickstand)

As you can see, Will LOVES this bike. When I rode it home, he immediately climbed up and off we went. Now I pick him up from school several times a week and we both enjoy the time riding so. While we ride, he’ll spin around on the deck, talking, singing songs in Chinese and wave at folks as we whiz home. Luckily, the current school is 5 miles away so its a nice ride. Sadly, his new school will only be 1 mile ride, too short of a ride.

First selfie, from the bike. Yes, he is eating a snack:

Training to qualify for the Boston Marathon and simplify our life, as a stay at home dad.
View all posts by Scott →
This entry was posted in Uncategorized and tagged Bike commuting, Biking, cargo bike, EdgeRunner, ExtraCycle, G&O Family Cycling, Seattle bike community. Bookmark the permalink.