I must admit, I’ve been in denial and didn’t want to admit it, at least publicly. Perhaps, I justified my silence by believing if it wasn’t mentioned, it wasn’t real. Also, lost my desire to write any posts, or even track my daily reader count. That is why I haven’t posted anything about my running in the last 5 weeks, because there hasn’t been any. I am injured.

All runners know injuries are just part of the game, especially those runners of ‘middle’ age who are trying to run faster than they probably should. You can’t completely avoid injuries so it’s all about injury management.

As I mentioned earlier, this year, I am using a marathon training plan that would have me running more miles and faster miles than I’ve even done before. Translation– more risk of injury. And I publicly acknowledged and accepted this risk.

The pain/soreness is above my left knee and I initially thought this was just an over-use injury and just needed some RICE (rest, Ice, compression, elevation). Tried that for about a week, no noticeable improvement so called a PT. The Physical Therapist (3 weeks ago?) wasn’t sure what the problem was but said no running for awhile and noticed some strength issues and balance challenges with my left knee so prescribed some stretching and strength exercises. And to check back in with her in two weeks. Because she was unavailable, I scheduled with a different PT. Met him last week and he too is a marathon runner and we actually spent more time talking about NW races we’d run or hoped to run then discussing my knee. Unfortunately, he planted a seed of concern when he was twisting my knee to mentioned, “you know, I really shouldn’t be able to make your knee move like this, I think you need to go to the Sports Med MD and get xrays around your LCL.” (lateral collateral ligament)

*&%$ it! For the next week, until the appointment with the Sports MD, I was thinking I’ve got a small tear in my LCL or stretched it- something that isn’t going to be solved by the RICE method. The appt was yesterday, and after he twisted and turned my knee into a pretzel, I asked him about what the PT had mentioned about the “unusual” LCL movement. He replied, “yes, I can move your knee in ways most people’s knees do not move.” And there was in Intern with him and he asked her if she wanted to hold my knee to check out this “irregular” movement. (I was thinking, “yeah, let’s bring in all the med students to see this guy’s freak of nature knee…)  But as the intern held and twisted my knee and said, “yes, this is odd movement”…he interrupted, “since I’m able to reproduce this movement in both of your knees, think of it as, like people who are double jointed, this isn’t a bad thing.”

So, if not an LCL issue, what is the source of the pain? After xrays came back negative he wasn’t completely sure but suggested likely just a strain in my quad muscle and Gluteus medius muscle right is also weak. Thank Goodness, that DX i can live with.

What is next- First, I am thrilled the injury isn’t anything worse and I absolutely want to start running ASAP. So, continue with all the stretching and strengthening exercises the PT gave me and I can start jogging again- slowly. A mix of 4/1 walk to jog ratio, at least for a few weeks. If all goes well and my next PT appt gives me the green light, I “hope” to start ramping up the miles in 4-6 weeks.

Therefore, the largest negatives of this experience is the lost level of fitness and the Tacoma marathon is now out.  A few unexpected ‘positives’ is swimming, as cross training. The city pool is within walking distance so I’ve been swimming 1-2x per week and I’ve also tried ‘agua jogging’ several times: 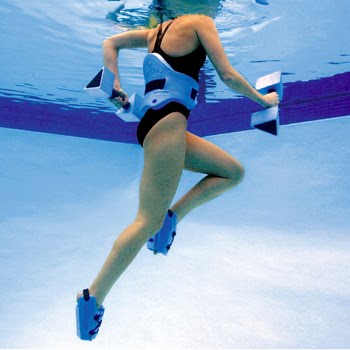 Both the MD and PT strongly suggested agua jogging. Feels kinda odd and a bit boring to do for 30 minutes but I recommend it.

Lastly, keeping my fingers crossed that by mid April I’m back into actual Marathon Training again.

Training to qualify for the Boston Marathon and simplify our life, as a stay at home dad.
View all posts by Scott →
This entry was posted in Long Run, marathon training, Medical and tagged agua jogging, cross training, Injury, LCL, Marathon Training, RICE method, swimming. Bookmark the permalink.

6 Responses to My Lost Winter